A baby is born on a plane from Lagos – why would a woman take such a risk?

The airline staff are baffled, but the Nigerian passengers are not. For us, lack of choice and dependence on chance is the norm. 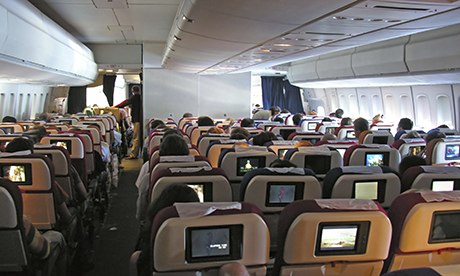 ‘The new mother was travelling alone, nobody knew her, and yet we felt as if we did.’ Photograph: Alamy

I was woken by the pilot’s voice. In the drowsy hum of the aeroplane, his words crackled, and I thought I heard something about preparing to land. Could I have slept so long? I looked at the time. It was only three hours into the Lagos-Atlanta flight. The flight attendants were hurrying back and forth. The pilot was still speaking. “We have an emergency on board, and we have had to divert the flight to Dakar.” I could feel the plane descending. It seemed too fast. A sweeping hollowness. My fog of sleep cleared instantly. Something was wrong, the pilot was too cryptic, the flight attendants too blank-faced, snatching up cups, urging seats straight. I thought: if I die, I hope it’s quick and I don’t know.

The woman beside me crossed herself. The flight attendants were already seated, and the cabin frozen in a bewildered silence, when the pilot’s voice came back on.

It was a medical emergency, he said, a pregnant passenger went into early labour and had just had a baby. I sensed, around me, a collective hush of relief and wonder. A baby delivered on the plane! We landed in Dakar. Medical personnel in orange vests hurried in, a man carrying a black box, a lanky woman dragging an IV stand, their eyes heavy with sleep. It was 2am; they had probably not imagined dealing with a newborn on a diverted flight. I wondered what the baby would need, and if they had what the baby would need.

Soon, the lanky woman left cradling a bundle wrapped in cloth. The baby. I strained to see better, hoped I would hear it cry. Then the new mother emerged, a young woman with a tube dangling from her arm, and behind her came the other medical staff, trying to support her. But she didn’t need him. She strode past, straight and steady, her movement so quick that I caught only a glimpse of her face before she left the plane. She looked stunned and frustrated. It seemed even more of a wonder to me, not only that she just had a baby in midair but that there she was on her feet, normal and unhindered. The baby’s birth had a heightened dramatic potential, which her ordinariness had somehow quelled.

The pilot came out of his cabin. A tall man with an easy air, the kind of pilot whose aura suggests competence. He told us it was a baby boy, and both mother and baby were fine. His American humour emerged. “Been flying a long time and this is a first for me!” The passengers – who were almost all Nigerian – laughed with a shared sense of delight, as though by being present we had somehow shared in bringing this baby into the world.

“The mother said she was 24 weeks gone but that baby looked full-term. Why would anybody take the risk?” An American flight attendant was baffled. We, the Nigerian passengers, were not. We did not ask why. As we waited for the flight to continue, boundaries blurred and friendships formed. The new mother was travelling alone, nobody knew her, and yet we felt as if we did. We speculated about her circumstances. She probably had visa problems, got her visa later than she’d planned, or perhaps she had not planned it early enough, or perhaps the American option emerged late in her pregnancy, and she’d chosen to do what she had to do because the sparkling worthwhile end was an American-born baby. I thought of her expression as she exited the plane, more frustration than worry, a lament for the American baby that would now not be.

Some passengers joked about her poor luck. “Now she has a Senegalese baby!” one said. “A Senegalese passport is still better than a Nigerian,” another countered. “They will give a Senegalese person a visa before giving a Nigerian.” “Good that the baby waited for the flight to take off, do we even have the right emergency services in Lagos airport?” someone else asked. We chuckled. Goodwill swirled among us. Thank God it ended well, many people said, thank God. Risk-taking was familiar to us. For too many in our world, this was norm: the lack of choice and the dependence on chance.

Again, the pilot’s voice brought news. A tyre had deflated, and the airline did not have the resources in Senegal to fix it in time. We would have to spend the night in Dakar. As we left the plane and got into buses, we sent text messages and grumbled about the inconvenience of arriving a day later than planned.

Still, the complaints about missed flight connections and important meetings were light-footed, because what mattered was that the birth had gone well and besides, someone said, who knew if the tyre would have deflated and caused landing problems in Atlanta? “Please my sister do you have any sleeping pills?” a stranger asked me.

I was struck by how quickly the passengers adapted. “The airline will pay for our breakfast but what about lunch tomorrow?” someone asked. Hopefully, the flight would have left by lunchtime, came the reply. Some passengers posed for pictures by the spurting hotel fountain. They had been delayed a day, but why miss a good photo opportunity in a fellow African city they might never otherwise have visited?

The next morning, slightly disorientated and starved of sleep, I skipped breakfast. When I finally went down to the lobby, most of the crew and passengers were gathered, waiting for the airport bus, faces dull and unrefreshed, voices a muted murmuring.

As I joined the group, a woman asked me if I had heard. “Heard what?” I asked.

• This piece was originally published in the New York Times

A Ration of Thorns